Happy Cinco de Mayo Everyone, even though this post has nothing to do with it.Hope everyone had a nice weekend.I feel refreshed and rejuvenated from my little bit of free time over the weekend.My mom and I went and saw Made of Honor, I went to a nice heated yoga class, got some great take out, watched a little tv, took some pilates classes, cooked a little and went shopping.I think I managed to squeeze everything I like to do in a very short amount of time!It was nice, but it’s great having all of my boys back.

My oldest little guy ratted out his dad and told me, “Dad wasn’t going to brush my teeth, I had to tell him to do it.”Nice!At least my 5 year old is looking after his dental health!And then, they told me that my youngest got lost for a few minutes at the camp ground.My husband found him just as he was going toward the lake. I should be grateful they are all back in one piece!

I made this pasta last night as a last minute thing and it was terrific. I love spinach and artichoke together so you’re getting LOTS of it in these two recipes! This pasta recipe is very simple with wonderful flavor coming from the artichoke hearts and pork sausage. It’s all tossed with Fettucini Fini noodles (thinner than original fettucini) and olive oil. Give it a try if you are a fan of these flavors. Everyone seemed to enjoy it last night. It’s much more colorful than it shows, I don’t know where all the spinach went in my pics. It really is a beautiful dish and looks great in a nice big pasta bowl. Enjoy!

1. Prepare pasta according to package directions. Drain and set aside. *If you spray noodles with cooking spray, they don’t stick together, I do this all the time.*

2.Place olive oil into a large dutch oven or pot over medium heat.Saute onion for 5 minutes then stir in artichoke and spinach leaves.Cook until spinach is wilted down, about 3 minutes.Stir in sausage and cook until browned.

I made this soup as my boys were on their way home from camping and really wasn’t expecting them to love it. It was inspired by a soup I have ordered a cute little cafe called Crackers and Company in Mesa. It was so good, I wanted to go re-create it at home. I did and it is great!

I utilized some of my left over ingredients from their “hobo dinners.”I used the rest of the garlic roasted veggis and 2 chicken breasts. You would have thought there was candy at the bottom of the bowl the way my boys were eating it.It is creamy and delicious and totally worth the calories!

I have to tell you about a wonderful product I always have around the house, especially when I make soup. It’s called Ultra Gel. It’s an instant “thickener.” It will thicken any liquid without even heating. It is truly a must have if you are an avid soup maker like me. If you live in AZ, you can get this product at Shar’s Bosch Kitchen store on Gilbert and Baseline or you can get it online at this LINK. It’s pretty inexpensive and a real keeper. If you don’t want to use it in this soup recipe, it’s no problem it will just be much thinner than how it appears in my picture. However, it tastes great both ways. Enjoy!

1. Heat large dutch oven or pot over medium heat. Cook bacon until crisped. Transfer bacon to a paper towel lined plate to drain. Discard all but 2 Tablespoons bacon drippings. Place the 2 Tablespoons of bacon drippings back into pot over medium heat. Saute vegetables, artichoke hearts and spinach leaves for 5 minutes, or until spinach is wilted down. Stir in chicken broth, half and half, and sour cream until smooth. Stir in chicken breast, crumble all but 6 pieces of bacon and stir into soup. Reduce heat to low. For a thicker soup, slowly whisk in ½ Cup of ultra gel until desired thickness. Simmer on low until ready to serve. Crumble remaining strips of bacon and crumble over each soup bowl.

How to Make the Perfect Mac and Cheese 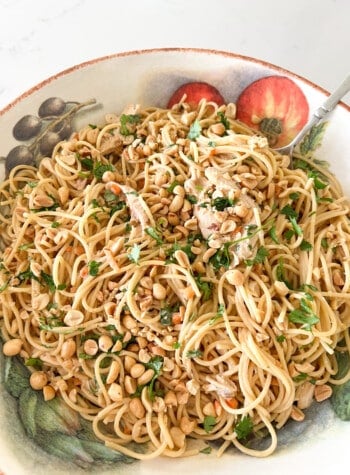